Showing posts from September, 2009
Show all 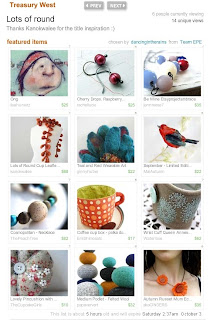 My polka dot coffee mug cup container is on this treasury!

Chose by DansingInTheRain from Team EPE.

I introduced DansingInTheRain in the earlier post as my favorite etsy seller.
I love her cats, she also has many sets of adorable turtle coasters! :D 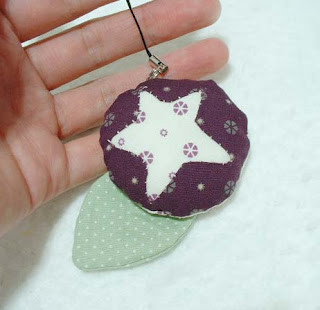 It is hard to take good pictures of items on a rainy day :(
But I anyway wanted to show off what is ready for my shop!

First of all, this plush is from Mai - mairuru-. She included this morning glory in the package when she sent me some fabrics.
I have been thinking what I can do with this small treasure, and since I bought many of cell phone straps, I put it on this small gift from her.


I have made some Inu-hariko pouch and totes, Chidori pouches since the first 2 of them have been sold.


And veins totes! I machine quilted on the front side. I made the closure as well with thin leather string and wooden beads. I thought it would be interesting to see virtical tote and horizontal tote in the same design.
Hope the weather will be improved very soon so that I can take good pictures of them to list them on my shop!
15 comments
Read more 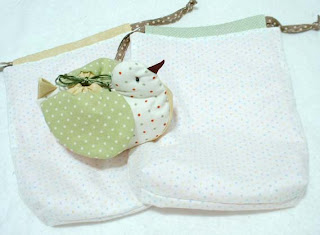 Made these upon my friend's request.
All polka dot! Yay! 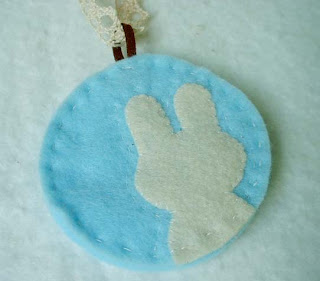 This design is from my original label. I thought I would make a round pouch in this design also, but figured out that it is too simple when this is larger. I might be able to put a face on the bunny and some decoration to make it not too simple, but I think I don't want to add anything :( So the plan for making a pouch turned into for an ornament.

I am not sure if this can be a Christmas ornament, but it could be OK if you are a rabbit lover.

I draw a pattern of this, enjoy making it if you are interested in.
It is very easy to make.


1. Download the pattern (click the picture above and right click, then save the file).
2. Cut 2 of 2.75" diameter circles from light blue (or any color you would like) felt.
3. Cut rabbit shape from white felt along the pattern.
4. Place the white rabbit on one of the light blue circle, and applique with blind stitch.
5. Attach string or lace on the top of the circle on the back side, and put another light blue circle on the back of the circle you appliq…
2 comments
Read more

Blog featured - Dance in my garden - 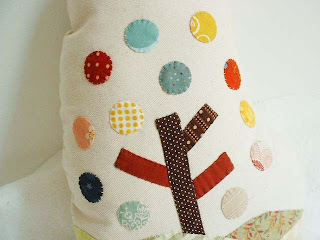 My pear cushion is featured on a blog - Dance in my garden -.

Thank you for picking up my cushion!!

She is talking about circles in the post, YES, I love circles too!!
Circles and drops are perfect shape to grab girl's heart!!
I am honored that my cushion in circle tree pattern is included her circle collection! :D

She also has a etsy shop, please take a peek :) 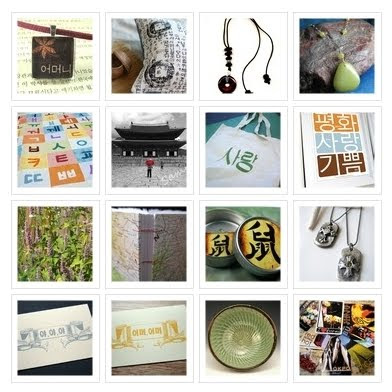 My Korean alphabet quilt is featured on this blog, Beyond Koreanfornian Cooking.

Speaking of Korea, my mother is very into Korean drama as well as other old Japanese ladies... She says Korean drama doesn't have sexual scenes a lot and it is comfortable to see it for her generation. I have seen some of them, I see what my mom said.

I have met one famous Korean actress in the English conversation club I usually attend every Tuesdays, she said Kiss scene is OK, but not been allowed to have a bed scene in a drama. She seemed to be a very famous as other Korean people who come to the club knew her.

Anyway, I am honored that my quilt is featured on this blog.…
2 comments
Read more

A package from Vietnam. 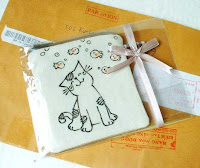 I purchased a pouch from this shop the other day!

Dancing In The Rains


S.U.P.E.R. C.U.T.E.....!!!
This cat's face really makes me happy, I naturally smile! I need to have this always around me so that I would remember how to smile even when I had something bad. It is like a good luck charm for me, not only that, but also useful as a pouch.

The pouch is now still in the cello bag..., I am afraid to break the atmosphere of this adorable wrapping. I think it will be on my desk for a while like a post card, and then start to use it when I have a special happening. This is a treat for myself! To buy this kind of small adorable things is to collect small happiness for me.

I would love her -- Dancing In The Rains -- to make post cards set with her original cat drawings. I have noticed she enclosed her business card, so maybe she is already thinking of it. It will make huge sales, I believe!!


It is also interesting to see a package from other country.
These are stamps …
Post a Comment
Read more 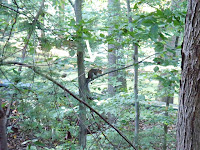 There are so many squirrels in my neighbor.
Sometimes they are so noisy fighting and chasing after other squirrel.
He /she was mad at something on the branch today, I couldn't figure out what made him/her mad that bad.

I made some Inu-hariko charms!!

Inu-hariko is a dog which has spirit of badgers and cats. It is Japanese traditional thing, used as a toy for children in old time era. It is also considered like a guardian for a child since a dog is considered as a fighter against evils. Nowadays, it is used as a good luck charm, or just a mascot.

Anyway, it's pretty, isn't it? I thought those inu-hariko mascot is good as a Christmas ornament as well.

I ordered little strips with clip hook last night to put on them. I am now waiting for them to be delivered. Once I receive it, I will list them up on my etsy shop!

Have a nice week, you guys! :D
2 comments
Read more 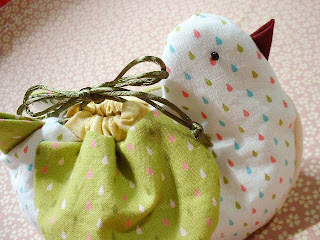 I think it is pretty!
It was fun to make it either!
Going to make it again with other fabrics! :D :D

Have a wonderful day, you guys! 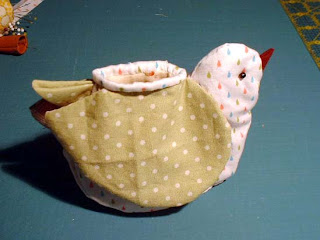 Tried to make a drawstrings bag in bird shape.....
And it didn't go well....
And it became a coin bank...
It is pretty after all, I think.

New pics of my idols. 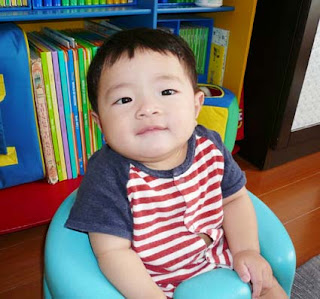 New pictures of my idols from my sister-in-law!
They are adorable as usual :D

They visited to one of theme park "Ise Spain park" in Mie, Japan on summer vacation. It is very exciting place for kids to visit. I am glad they made it since she was worrying about my brother's job schedule. He owns a company, he must be pretty busy everyday.

I wish I could be there with them, I would love to share my time with them especially when they a little age... it makes me depress when I remember the fact that I am so away from them.

Appreciating my sister-in-law so much for keep updating how they are doing and sharing their pleasure. 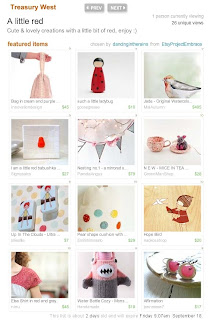 My pear cushion is in this treasury :D

A little red -- chosen by dancingintherains

Thank you so much!!

dancingintherains is my new favorite seller!
I found her since she added my shop in her favorite list.

Her items are so peaceful, I love her cats!!
They are all drawn by her.
And,,, I am now waiting for this cute pouch to be delivered!!
Cat Loves Fish Pouch

It might become a gift for my friend who is a cat lover later, since I first thought of her when I found it. But I am not sure if I can let it go... 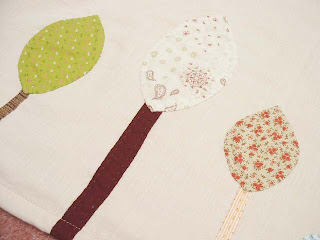 Custom order pink gauze blanket.
She found me on Flickr site. Thank you very much :)

I love this blanket as I would love to use it for myself!

Wondered for a while if I want to do applique with a sewing machine through my previous experience. I think I love the touch of hand applique which I think it matches with gauze fabric. So, I took hand applique this time, it took a while to complete, but I love the result.

Finally used a piece of muslin that I kept for a long time for one of a tree (please refer to the 2nd picture). I just straight stitched on muslin fabric with white thread, to make kind of new fabric. I think this piece of fabric is perfect for a tree. It is much better than solid muslin for it :D

Now, I am going to work on the 2nd blanket! I will continue to enjoy :) 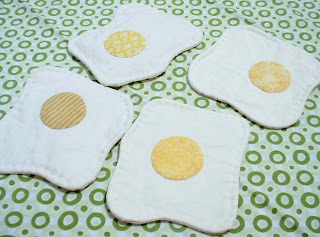 I have been really being influenced by Mai - mairuru - since I met her online.
Anything she makes just drug me into crazy.... also her life I see on her blog and from emails we exchange, too.

Since she made this cute kit - Sarubobo helps you pincushion making kit -, I wanted to make a kit too. And here is my first kit...., Sunny side up coasters kit.

This is very easy to make for a sewing beginner. You don't need a sewing machine which maybe being put away in the closet, just enjoy small sewing world by your hand.

It took a few days to make instruction, with long hours labor per day.... as my eyes started to be hurts because of staying in front of my computer for long stretches.

I am thinking to make another kit..., probably - a drawstrings bag with Japanese kimono fabric kit - that also you can sew by your hand. I anyway have tons of fabric.... as I don't think I can use them all in near future, and still love to buy fabric (>_<). Holding myself from buying i…
Post a Comment
Read more
More posts